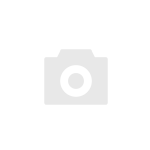 Setup allows you to perform automatic call back on missed phone calls for a given scenario and user settings (fig.1).

Every 10 seconds or more, the list of lost calls (see Figure 2) is updated with telephony server data; when new calls are detected, the call is made in the "1C:Підприємство" session of the free user in accordance with the script settings. (see “Call Distribution Algorithm”). 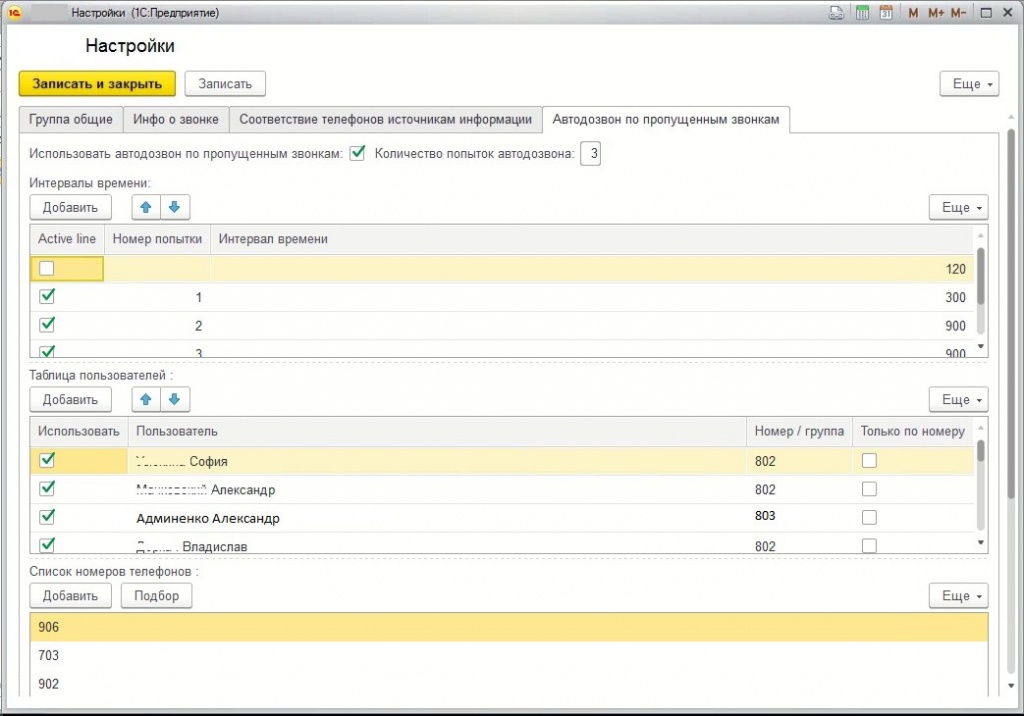 
Settings are made on a separate tab of the “"1C:Підприємство" Integration with Virtual ATC” module settings form.


The setting “Use autodial for missed calls” is the general default setting for all users.

The value of the setting “Number of autodial attempts” sets the number of attempts to dial the client in the state Active Line. The number of dialing attempts is unlimited if the user does not pick up the phone while automatically initiating a call.

The “Intervals time” table sets the time in seconds after which the automatic call will be made. The time period between attempts may be at least 2 minutes. You can specify different intervals for each of the call states (flag «аctive line»).


A table of users with data about belonging to a group or division. For example, if a call arrived at the sales department number (column “Number/Group”), dialing should be made in the "1C:Підприємство" session of the user who works in this unit.


Setup of internal lines (numbers) for which the functionality of setup will be carried out. This setting can be convenient for administration if several users have the same internal number.

All settings performed in this form are “default settings”, and are applied in a user session only when the “IP telephony” panel is reopened or the "1C:Підприємство" session is restarted.

Calls to the first place are made by calls that have not yet made any attempts to call back, provided that the operator picked up the phone and was called to the customer’s number.

In the queue of lost calls for which there was no dialing, or there were the same number of attempts, the most recent calls will be in the first place.

The algorithm determines the most efficient (by “active line” calls) operator by the formula:

and auto dialing will be performed in the session of this operator, for example:

If the efficiency of the operators is the same, everything is in the workplace and every time an automatic dialer attempts to pick up the phone (EO = 100%), then a check is performed as per item 4.

A check is made of the number of call attempts made by each number, the current operator, if there has already been an attempt to call back, the next call will be in session "1C:Підприємство" of the operator who has fewer.

Priority on the order number of the employee in the settings. For a new lost call, (when distributed among operators), first of all, the sorting by user priority will work, since all other priority parameters will be the same.

On the tab “Lost calls” of the “IP-telephony” panel, the user has the ability to enable or disable the setting for the period of absence from the workplace or for other reasons (the flag “Use automatic redial” in Figure 2)

In a situation when there are telephone numbers “Offline” in the queue of missed calls or incoming calls to these numbers are prohibited, the ability to exclude this number from the queue and thus not waste time on unsuccessful redialing calls has been added.

In the "Dialing number" column, the number of the autodial attempt in the Active Line state for each of the numbers is shown.

Interrogation of lost calls and the launch of the chime algorithm is performed after a time interval that is shown in the field “every [s]”, and can be changed by the developer in each case but not less than 10 seconds (restriction of the IP-telephony server). 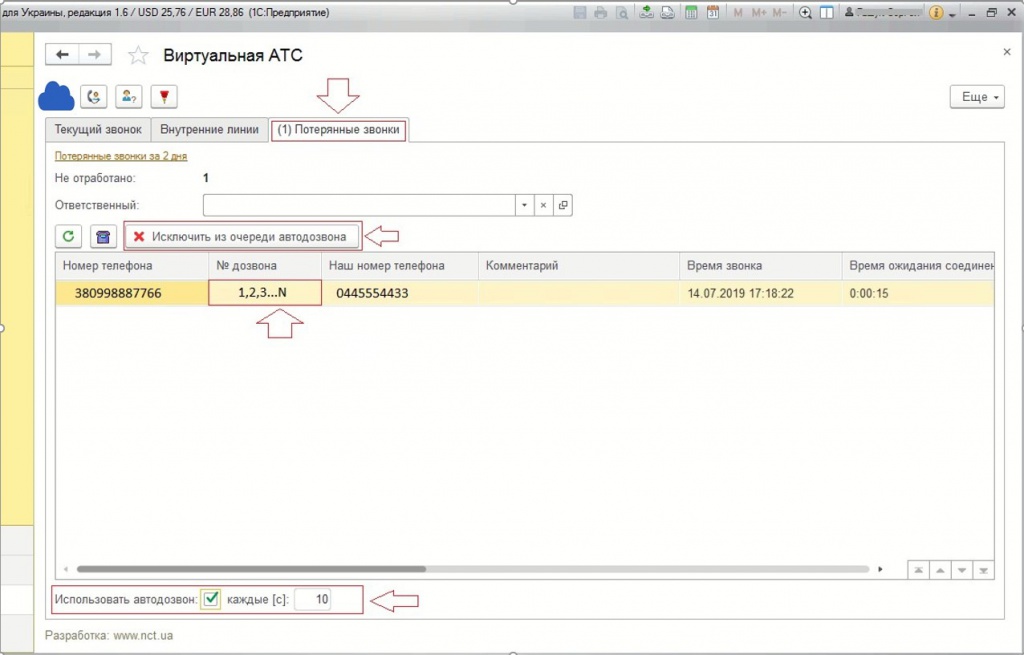 For the administrator settings, you can connect the interface for analyzing the sequence and time of attempts to redial each user.


How to configure and which configurations are suitable